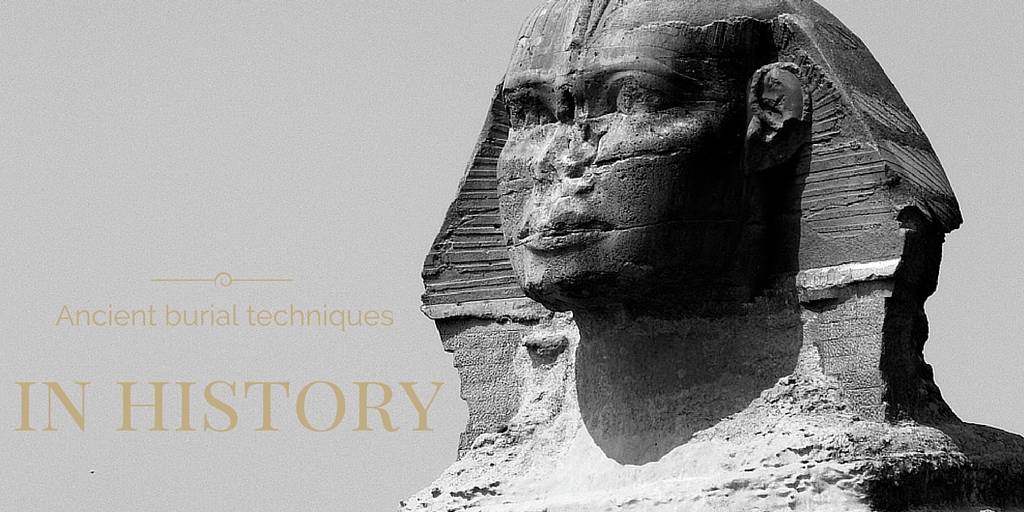 Burials of the dead have been a part of culture since the ancient world, and here we take a look at different methods in history.

Burials of the dead have been a part of culture since the ancient world, and can be traced back over 100,000 years, as evidenced by the Grave of Qafzeh in Israel. For many years graves have been cut into the earth, as it was thought this would place corpses closer to the afterlife, which was believed to be underground.

The earliest grave ever uncovered in Europe is that of the ‘Red Lady of Paviland’, which is 33,000 years old, and located on the Gower Peninsula in South Wales. Gravestones in the past, like today, were usually marked with a memorial bearing the person’s likeness and name.

“We know that burials have always been a very important event in prehistory. From the Neolithic court tombs to the megalithic portal tombs and even ancient stones said to be where giants were put to rest, these have all been based on very deep beliefs. Today we see burials in different cultures in a variety of ways. One of the more peculiar burials are found in the form of Ossuaries, some of which date back to the 7th century.” – Christa Thompson, The Fairytale Traveler

The ancient rituals throughout history are fascinating, and still intrigue people to this day, with millions of people each year travelling to see elaborate cairns and tombs such as the pyramids of Egypt.

More ‘common’ Egyptians were buried in the ground, unlike their wealthier counterparts, and would be laid to rest with as many Shabti Dolls as their family could afford. Bodies would be buried in a curled up fetal position, and would usually be well preserved due to the dry and sandy conditions of Egypt.

However, kings and rich individuals soon longed for something better, and initially began by building mud-brick tombs called mastabas. This method did not last for long though, as when family members returned to honour their ancestors, their bodies had not been preserved in the moist interiors of the tombs.

This was when the ‘mummification’ was developed to ensure preservation, and began with bodies being wrapped in linen, which were then left to dry in the sun. This process was expensive and took years and years of trial and error before it reached its quality peak, when embalmers would remove internal organs.

The Egyptians believed that non-existence was one of the worst punishments imaginable, and in order to prevent this from happening, would inscribe deeds on the tombs and monuments of royal rulers to remind the living of their existence.

Cats were also treated very similarly to ‘common’ humans, and would receive a burial, while families would mourn the loss of their pet for the same length of time as a relative and shave their eyebrows off as part of the ritual.

Burial practices in the Roman period would always take place at night, in order to prevent disruption of daily activities, and would include a funeral procession from the city to the walls of the cemetery. Corpses would either be burned and placed in an urn, or interred in a tomb, outside of the city due to health concerns and to keep a boundary between the living and the dead.

“The Romans, like many cultures, used different methods of disposing of human remains based on the cultural and religious trends at different times. During the Archaic era, burial was the predominant method, most likely mimicking the practice of Neolithic man which sought to create some kind of link with the afterlife. Often bodies were buried with favourite objects or weapons.

“During the Republican period, cremation became the preferred method because it offered a way to honour the dead through a celebratory rite. The Romans were notorious for their veneration of the dead, and Patrician families had death masks made of departed relatives for display in the family shrine. The patriarch of the family would pray at the shrine and seek advice from the departed.

“At some point around the time the Empire was established, inhumation became popular. Elaborate tombs were constructed and located outside the city to avoid pollution of the living. The most famous example of these tombs can be seen along the Appian Way.

“The idea of inhumation was strongly reinforced by the growth of Christianity in the fourth century AD when Christians labelled cremation a pagan practice that must be condemned for true believers. This belief was partly based on the concept that cremation was a desecration of a body that comes from God and the influence of Jewish beliefs on Christianity that the body comes from the earth and must be returned to it.” – Mike Anderson

Here, Mary Harrsch, Editor of Ancient Times, tells us a bit more about the Romans and their burial process.

“Romans of the Republican period and early 1st century CE mostly practiced cremation. But with the adoption of religions teaching personal salvation and a different view of the afterlife, such as the cult of Isis, the worship of Mithras and Christianity in the second century CE, Romans shifted from cremation to inhumation and the practice of interring the deceased in an elaborately carved sarcophagus becomes more common for the Roman elite.

“The imagery on the sarcophagi I have seen, however, is mostly pagan in nature and depicts primarily mythological scenes. One of the most beautiful I recently photographed depicts a Dionysian procession where the god of wine, festivals and the primal energy of life, Dionysus, and his satyr and maenad attendants dance towards Ariadne, asleep in the lap of Thanatos, the god of death. In mythology, Ariadne is the daughter of King Minos and helps Theseus escape the labyrinth of the Minotaur. They become lovers but Theseus yearns to return to his homeland so abandons Ariadne on the island of Naxos. There, she falls into a death-like state (asleep in the lap of death). But Dionysus arrives to resurrect her and marry her.”  - Mary Harrsch, Ancient Times