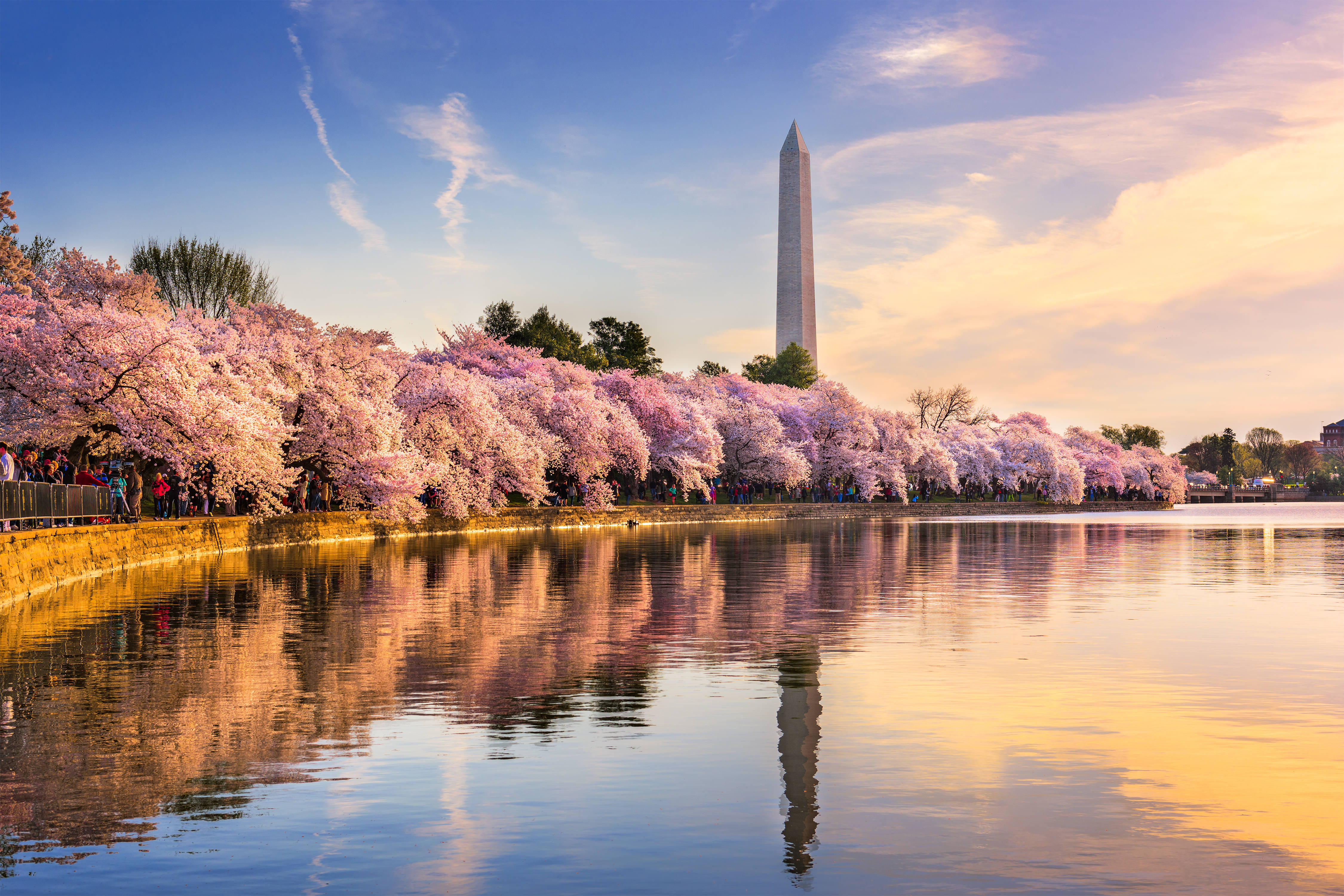 Famous memorials from around the world

Discover the story behind some of the world’s most famous memorials, from the stunning Taj Mahal in India to the sombre Holocaust Memorial in Berlin.

Memorials and monuments are such important parts of life. A site to grieve, to reflect and to also think onwards to the future, we are most used to personal memorials like marble headstones or a more bespoke monument.

However, around the world, there are an uncountable number of dedicated memorials that are more public. Whether in remembrances of wars, memorials to those lost in tragic events or even monuments dedicated to notable figures in history, you’ll be able to find dedications to the past everywhere.

In this article, we look at some of the most famous memorials from around the world, discovering their history and their significance in modern-day culture. 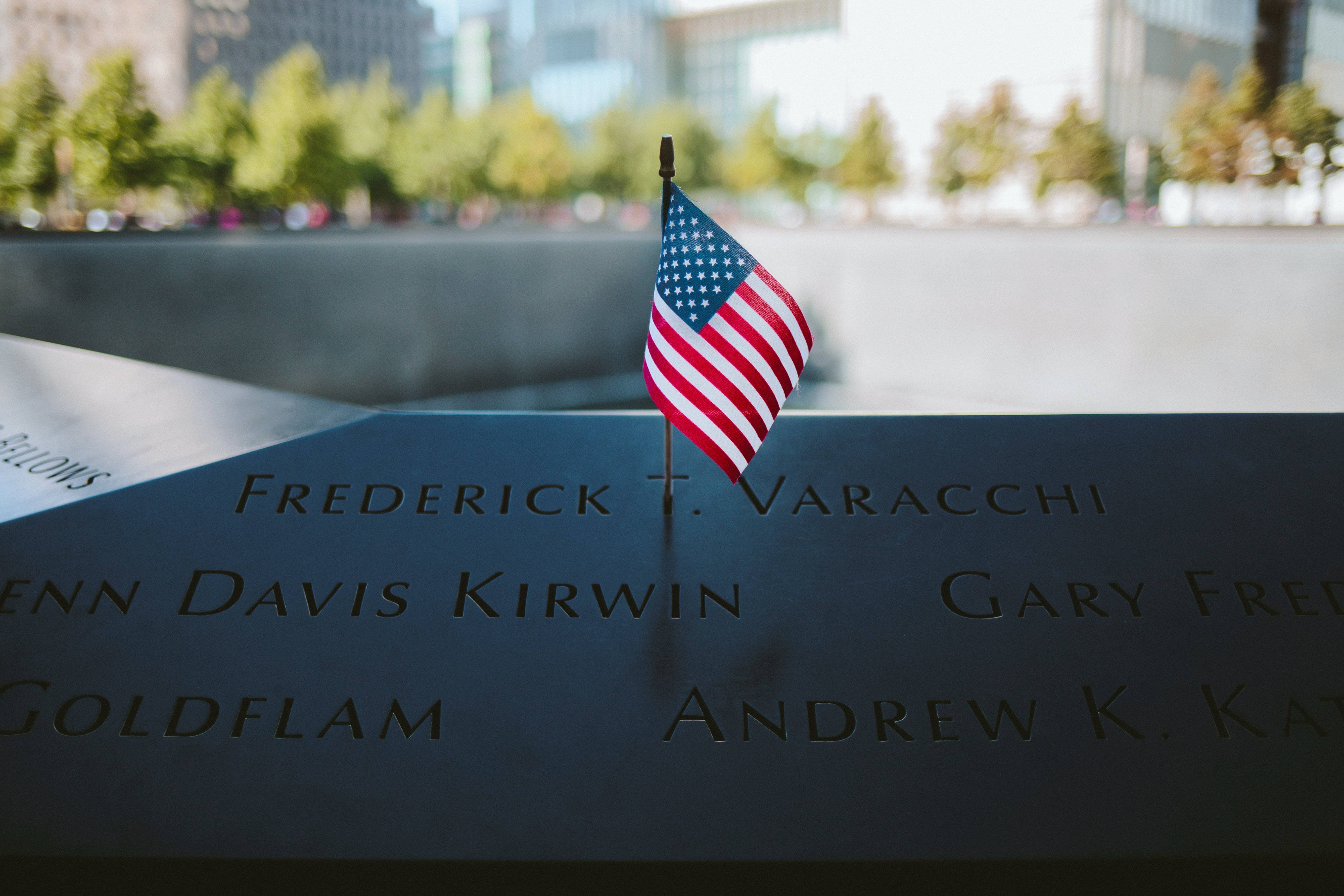 One of the most famous and significant memorials in the world is the 9/11 memorial, situated at the World Trade Center in Manhattan, New York. A solemn sight for any who have seen it, the memorial comprises of two reflection pools which fill the footprints of the former Twin Towers. Surrounding these pools are bronze parapets inscribed with the names of 2,983 victims - 2,977 from the victims of the September 11th attack on the Twin Towers and six who were killed in the 1993 World Trade Center bombing.

What is unique about this site from a memorial standpoint is that for many people, the events it was created to acknowledge happened in their lifetimes. Although in the middle of one of the busiest cities in the world, this memorial site gives visitors a chance to remove themselves from the hustle and bustle of everyday life. With myriad trees surrounding the reflecting pools and the sound of the water flowing within the pools, those who visit can be transported into a calmer and more relaxed place – perfect for reflection. 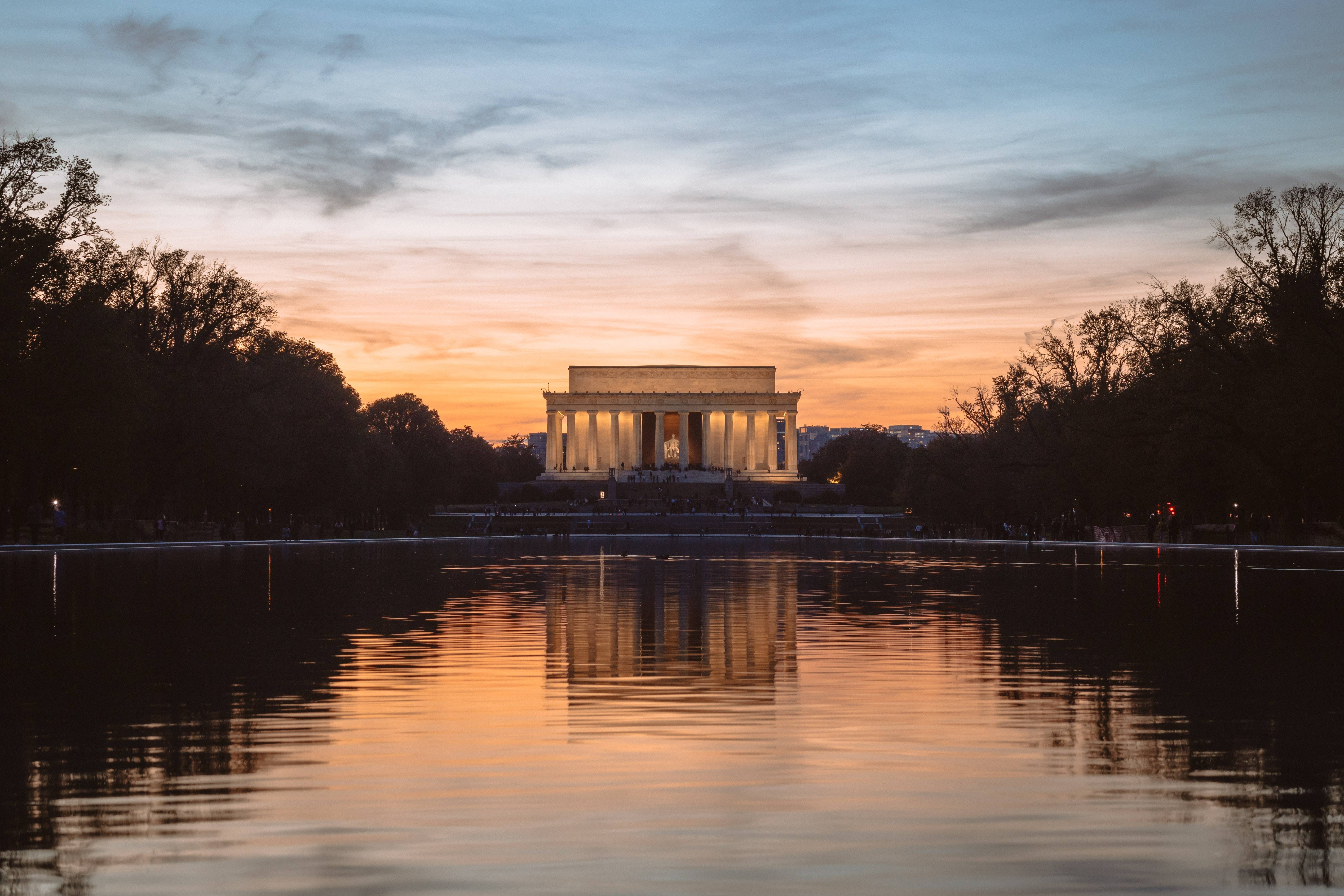 One of the most iconic sites in America and a place where many memorials stand and can be seen is in Washington DC on the National Mall. Here, you’ll be able to see, among others, the Lincoln Memorial, Washington Monument and Vietnam War Memorial. Located next to the Whitehouse and in the country’s capital, the National Mall is a wonderful place to come to learn about America’s turbulent history.

The Lincoln Memorial is a dominating and recognisable sight and was designed to commemorate the life of Abraham Lincoln, the 16th President of the United States who served from 1861 till 1865. Although a short tenure, the impact Lincoln had on the country was massive, and as such, this landmark was created in 1922 by Henry Bacon to honour the late president.

The third memorial within the National Mall we want to highlight for its significance is the Vietnam War Memorial. Located on the West side of the Mall just north of the reflecting pool, the Vietnam War Memorial consists of three main components, with the most prominent being the large, marble wall inscribed with 58,320 names. Alongside this is The Three Servicemen, a bronze statue showing three servicemen of different ethnic heritage overlooking the marble walls. Finally, there is the Women’s Memorial, dedicated to the many women who served in the Vietnam War, mainly as nurses. 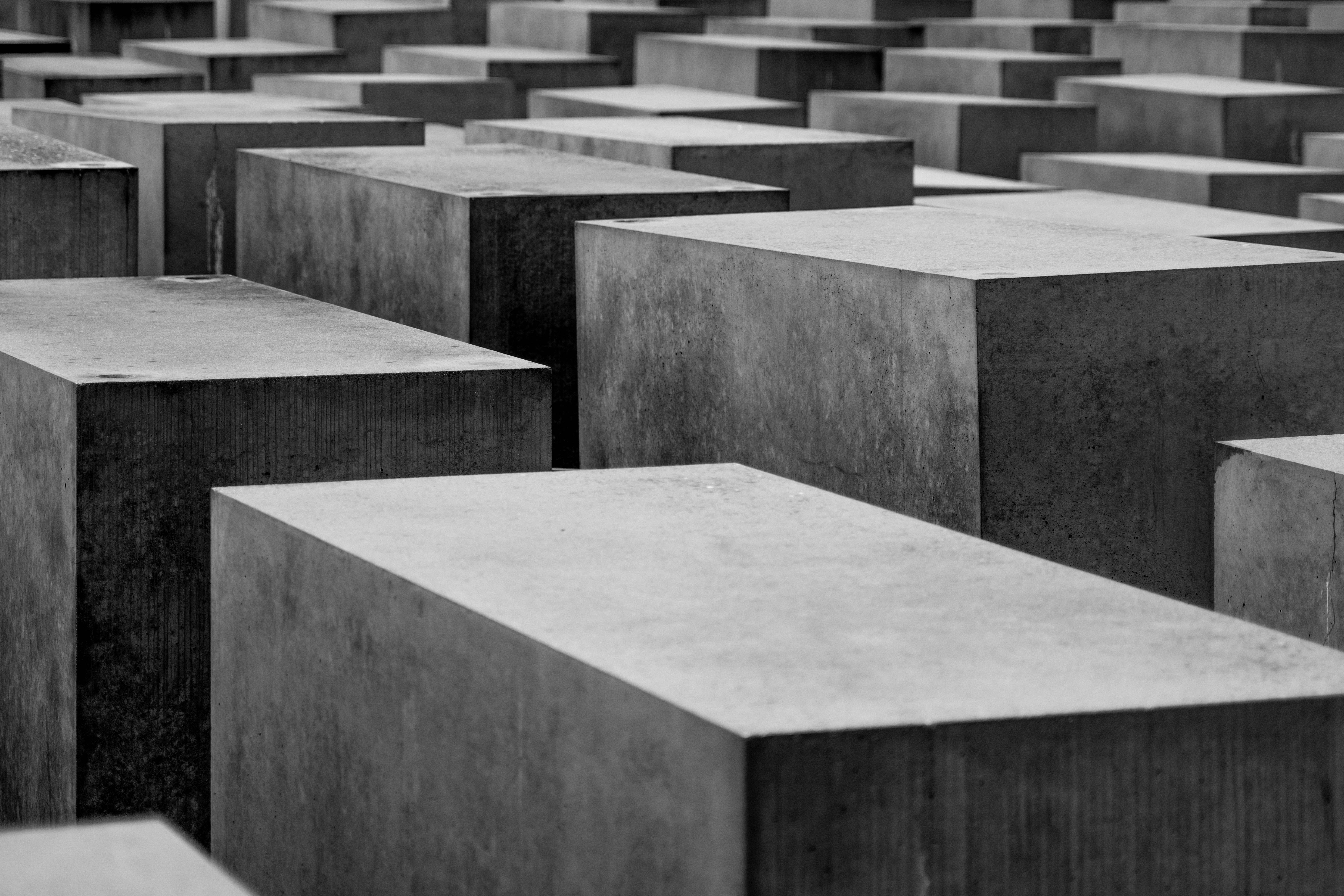 Situated in Berlin, Germany is the Memorial to the Murdered Jews of Europe, known as the Holocaust Memorial. A sombre sight, this grey, colourless memorial is located a short distance south of the Brandenburg Gate and is a haunting reminder of a sombre past.

Containing a total of 2,710 concrete slabs known as stele, this large memorial site was created to be thought-provoking and to ensure that the tragedy of the holocaust is not something people come to overlook or forget. The stele themselves at first may look like a pattern, but on closer inspection are erratic and random in size and some are even unevenly positioned.

Discussing the importance of a large monument, architect Pete Eisenman explains: “Architecture is about monuments and tombs, said the architect Adolf Loos at the turn of the 20th century. By that, he meant that a human individual can be thought of by a stone, a plaque, a cross or a star. Since the Holocaust, since Hiroshima, since the existence of the mechanism of mass killing, this simple idea no longer applies. Today, an individual can no longer be sure of dying an individual death, and architecture can no longer be reminiscent of life as before. The markings that used to be symbols of an individual death now need to be changed and this has a significant impact on the idea of memory and the memorial. The extent and scale of the Holocaust inevitably make any attempt to represent it by traditional means a hopeless undertaking. The memory of the Holocaust can never be nostalgia.” 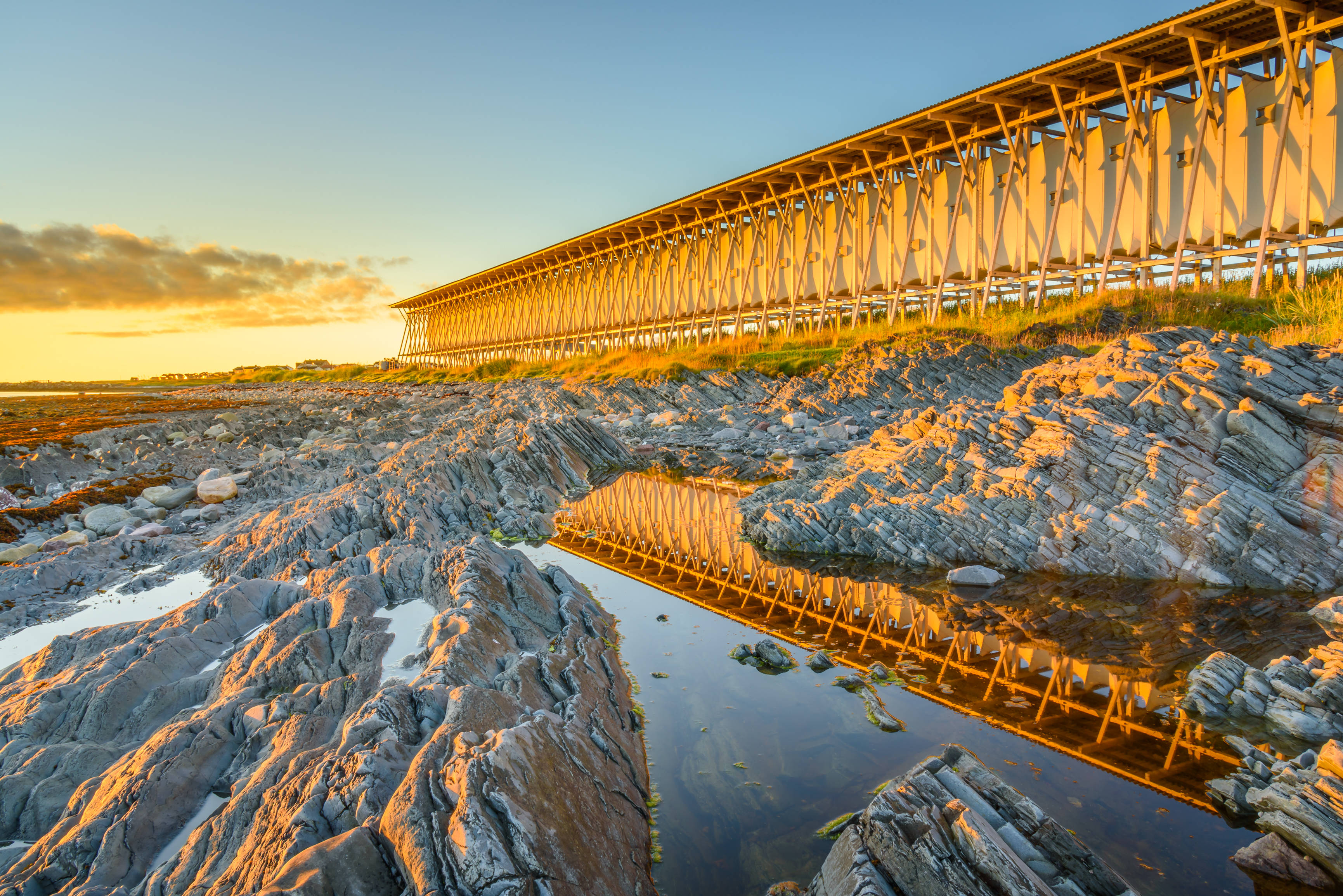 Certainly a more unique memorial, the Steilneset Memorial to Victims of Witch Trials in Vardø, the most westerly town in Norway, commemorates the 91 people tried and executed for witchcraft in 1621. Although the town of Vardø was not the only in Scandinavia to hold witch trails during the 17th Century, it was thought to have been the location of the most substantial where over 100 people were tried.

One of the most recent memorials on our list, this monument was completed in 2011 and was a joint project between French artist Louise Bourgeois and architect Peter Zumthor. The memorial itself is part monument, part art installation and as such is a truly fascinating visit. Not only to reflect upon the trials and executions that once took place here, but also to marvel at the beauty of this creation. 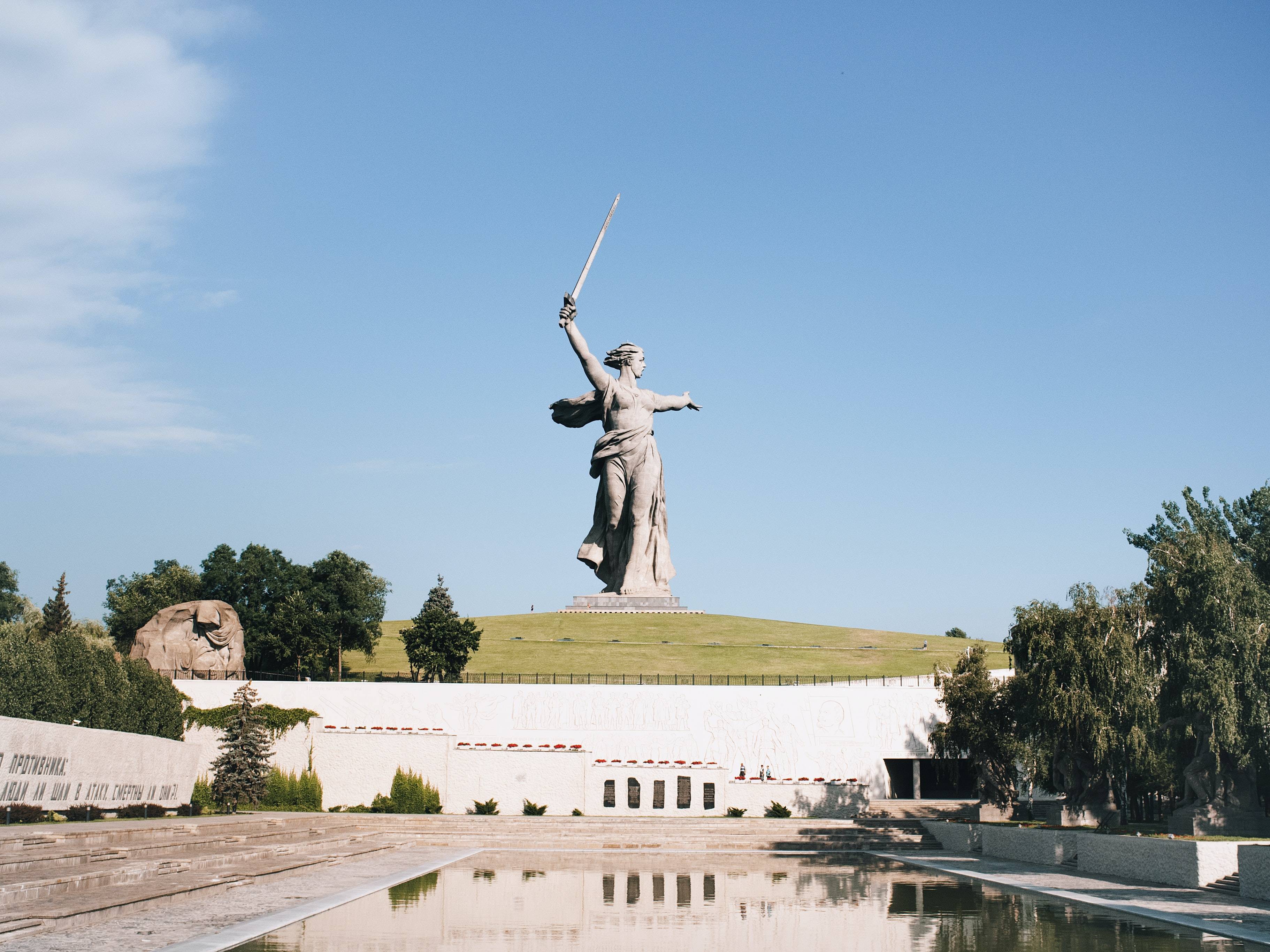 This statue might be lesser known than some of the others on the list, but it’s certainly a stunning piece of architecture and monument. The tallest statue of a woman anywhere in the world (excluding those on pedestals), the piece is dedicated to the ‘heroes of the Battle of Stalingrad’.

At the base of the hill are 200 steps, one for every day the Battle of Stalingrad lasted, and, on top of the hill the statue towers at 85-metres tall. The statue does not stand alone and is part of a triptych of works including Rear-Front in Magnitogorsk and Warrior-Liberator in Berlin's Treptower Park. It is thought that these three pieces show the sword being forged, raised and then finally dropped in Berlin. 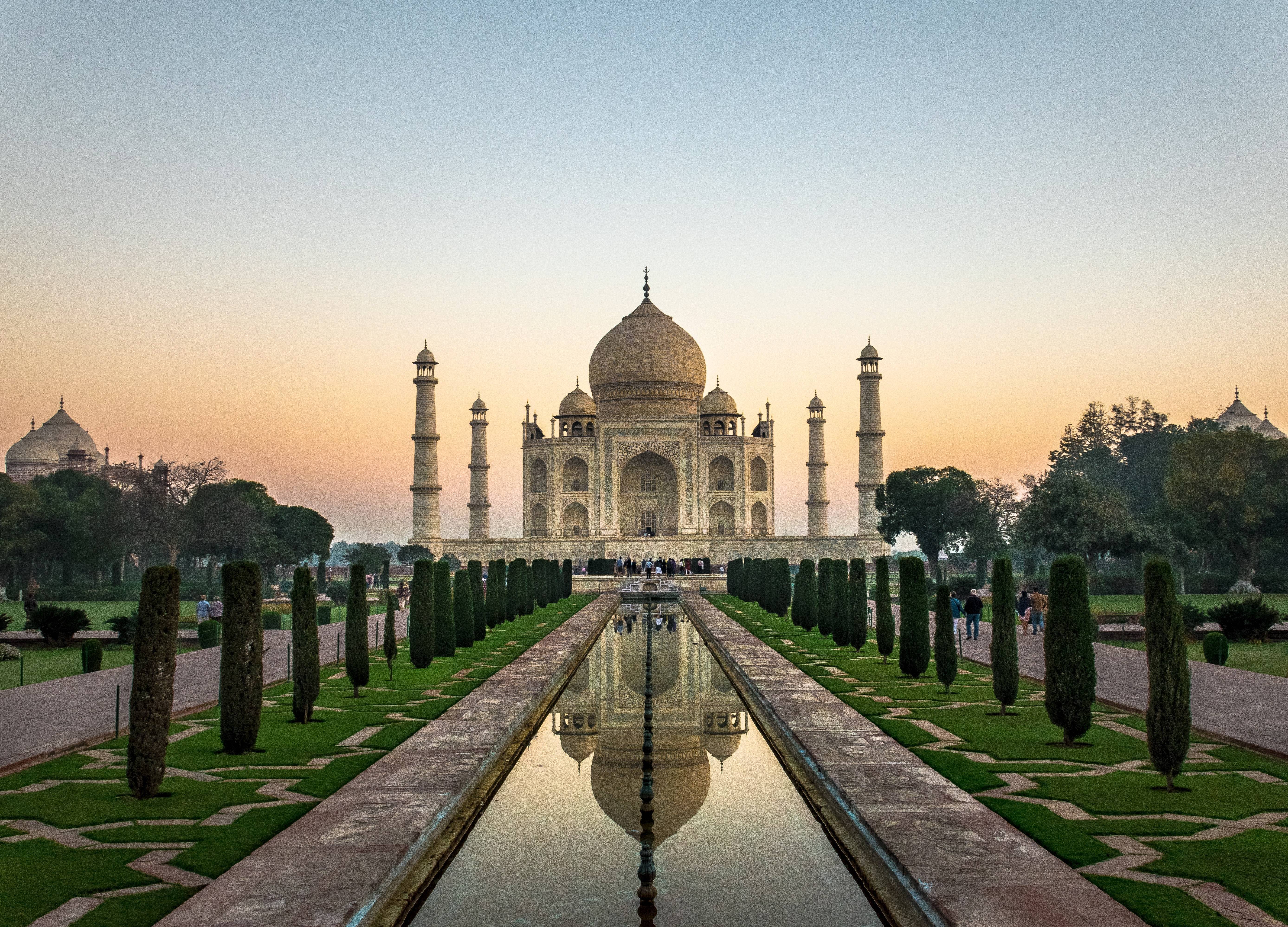 Arguably the most romantic memorial in the world, many people may not even know that the Taj Mahal is a mausoleum. Commissioned by Emperor Shah Jahan in 1632, its function was to house the tomb of Mumtaz Mahal – his favourite wife. Crafted almost exclusively from marble, this stunning site is a true testament of love and a stunning site. In fact, it has been a UNESCO World Heritage Site since 1983.

Mumtaz Mahal and the Emperor’s love story is one that has carried down through the years thanks to the prevalence and beauty of the Taj Mahal. Mumtaz Mahal was the Emperor’s third wife and died after delivering their 14th child. It is said that the Emperor was so grief-stricken he spent years designing the palace as a tribute to his lost love. And, when the Emperor later died, he too was buried here to be with his beloved. 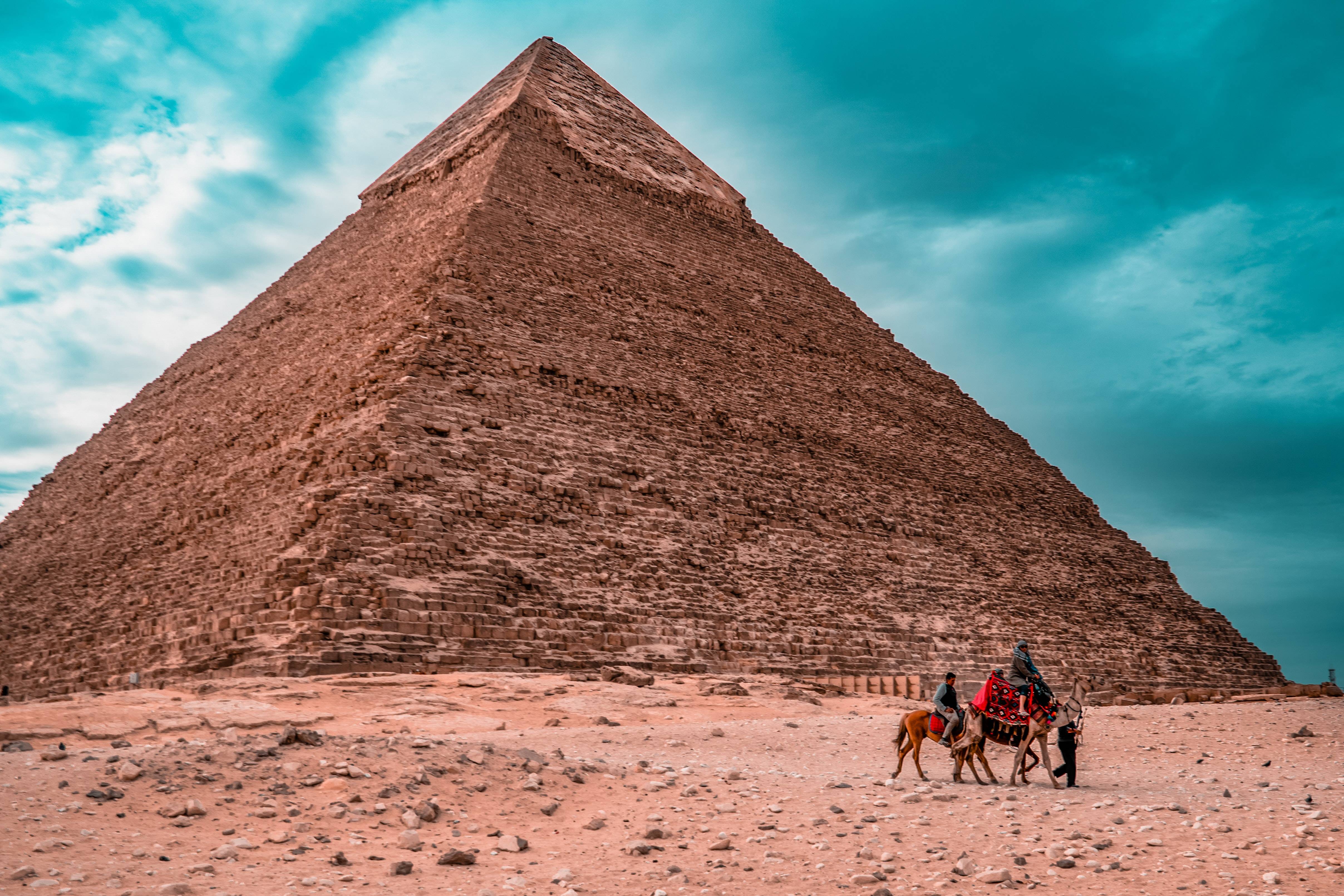 The oldest monument on our list, the Great Pyramid of Giza is the oldest and largest of the three pyramids of Giza. Not only that, but it is not only the oldest of the Seven Wonders of the World but the only one to remain largely intact. Because of this, it’s probably the most identifiable of the monuments on our list, however, not many people know the story of this memorial.

It was believed that the pyramid was created as a tomb for Khufu, a fourth dynasty Egyptian Pharaoh. Inside the pyramid are a number of small passages, each leading to the King’s Chamber, Queen’s Chamber and the Grand Gallery. The construction method of the pyramids is still wildly up for debate, as they are a feat of engineering and even in the modern world would be an impressive monument. 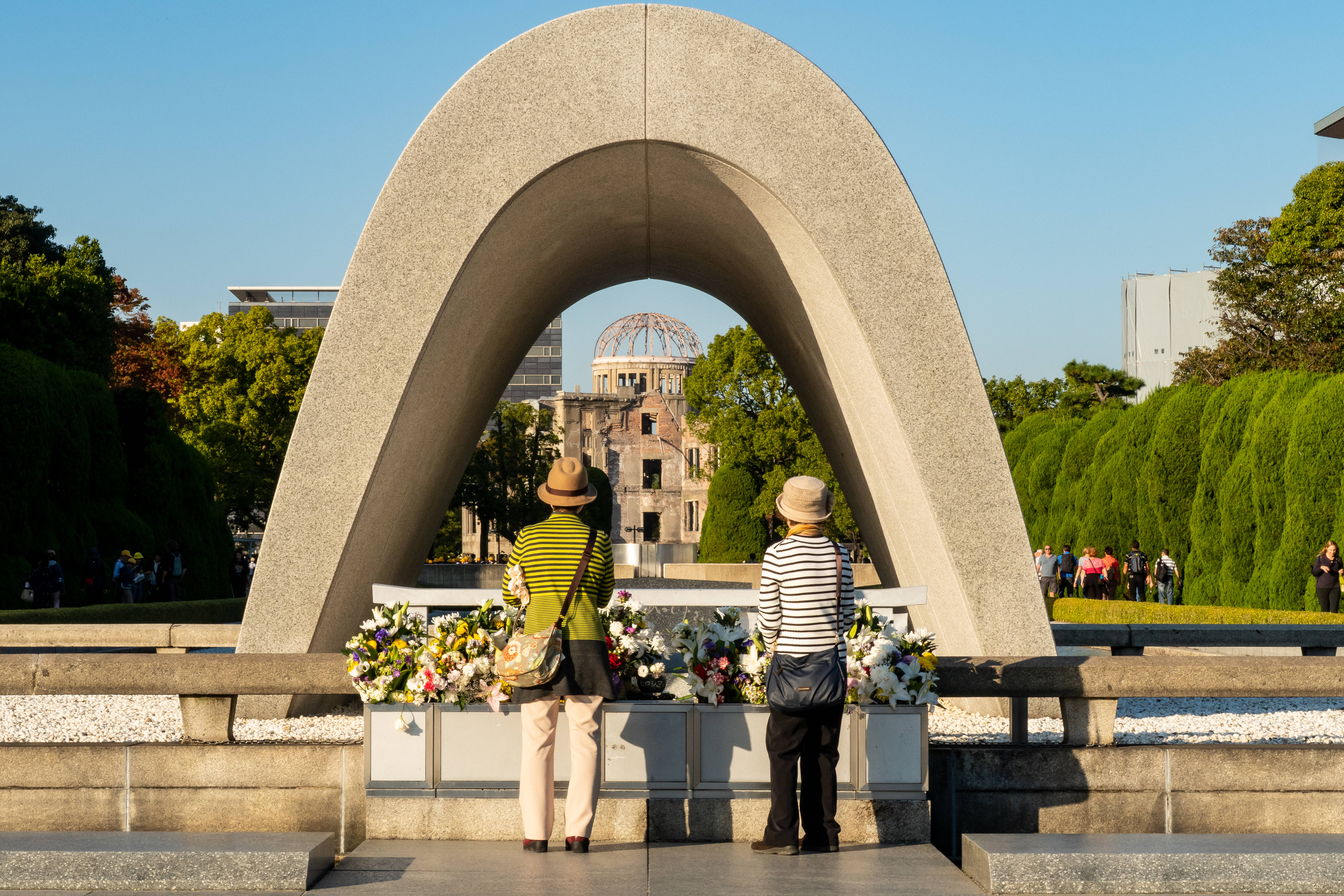 The Hiroshima bombing is something many know about and was devastating to the city of Hiroshima and the country of Japan. At the centre of the Hiroshima Peace Memorial Park is the Genbaku Dome. Originally used for art and educational exhibitions, the Genbaku Dome is now most famous for being one of the only surviving buildings in the bomb’s hypocentre.

Now, the building and surrounding peace park are a dedicated UNESCO World Heritage Site. The Dome itself stands in almost the exact same condition it was in after the detonation of the bomb on the 6th August 1945, however, it now stands as a monument to peace.

Famous memorials from around the world:

These are only a small selection of major monuments around the world. Each individual and beautiful in its own right, oftentimes we find that when looking to buy a headstone, looking to memorials like these for inspiration and consideration can be useful.

Read our blog for more useful articles or get in contact today.