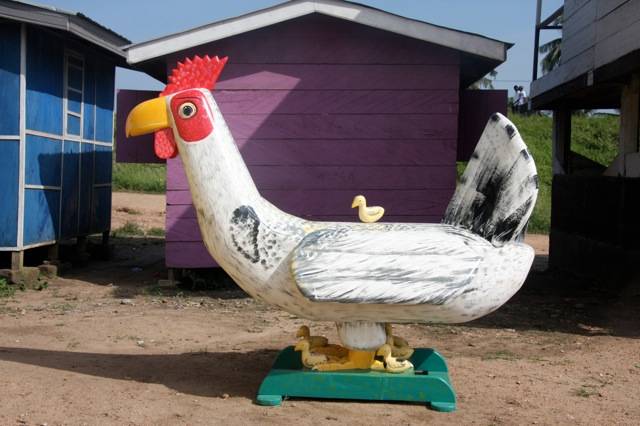 The art of death: Ghana casket maker is honoured

Fantasy coffins are a unique cultural export associated with Ghana due to an unusual tradition exclusive to the ethnic group of Ga people and the Greater Accra Region. These stunning coffins were unknown to the Western world until 1989 when the French exhibition ‘Les Magiciens de la terre’ showcased seven of these stunning works of art. Kane Kwei is the undisputed father of this discipline and his apprentices and descendants are still the authority in this field in Accra.

The fantasy coffins are meant to represent a key aspect of the deceased’s life or work, so a Poultry famer might be buried in the chicken coffin pictured or a taxi driver may be buried in a certain model of car. Since 1989, Paa Joe, the nephew of Kane Kwei has enjoyed international acclaim, exhibiting his works worldwide and touching on relevant cultural issues. Often sought after by US presidents, the demand for the traditional artefacts of this isolated community are on the rise.

Though very different from the traditional headstones we regularly see, these coffins are displayed only on the day of the funeral when they travel through the deceased’s village or local area before burial. It seems a shame such beautiful craftsmanship is enclosed in soil, but Paa Joes works can be viewed in prominent galleries and he has spent time working as the artist in residence, notably in Nottingham.

Now at the age of 69, Paa Joe is seeing some recognition in his hometown as his work is being celebrated in a major exhibition in Accra. This is following a documentary by the British film maker Ben Wigley who followed Paa Joe and his art in ‘Paa Joe and the lion’ which premiered in August 2016 and led to an enormous commission for dual coffin in the shape of a Chevrolet Stingray Convertible.