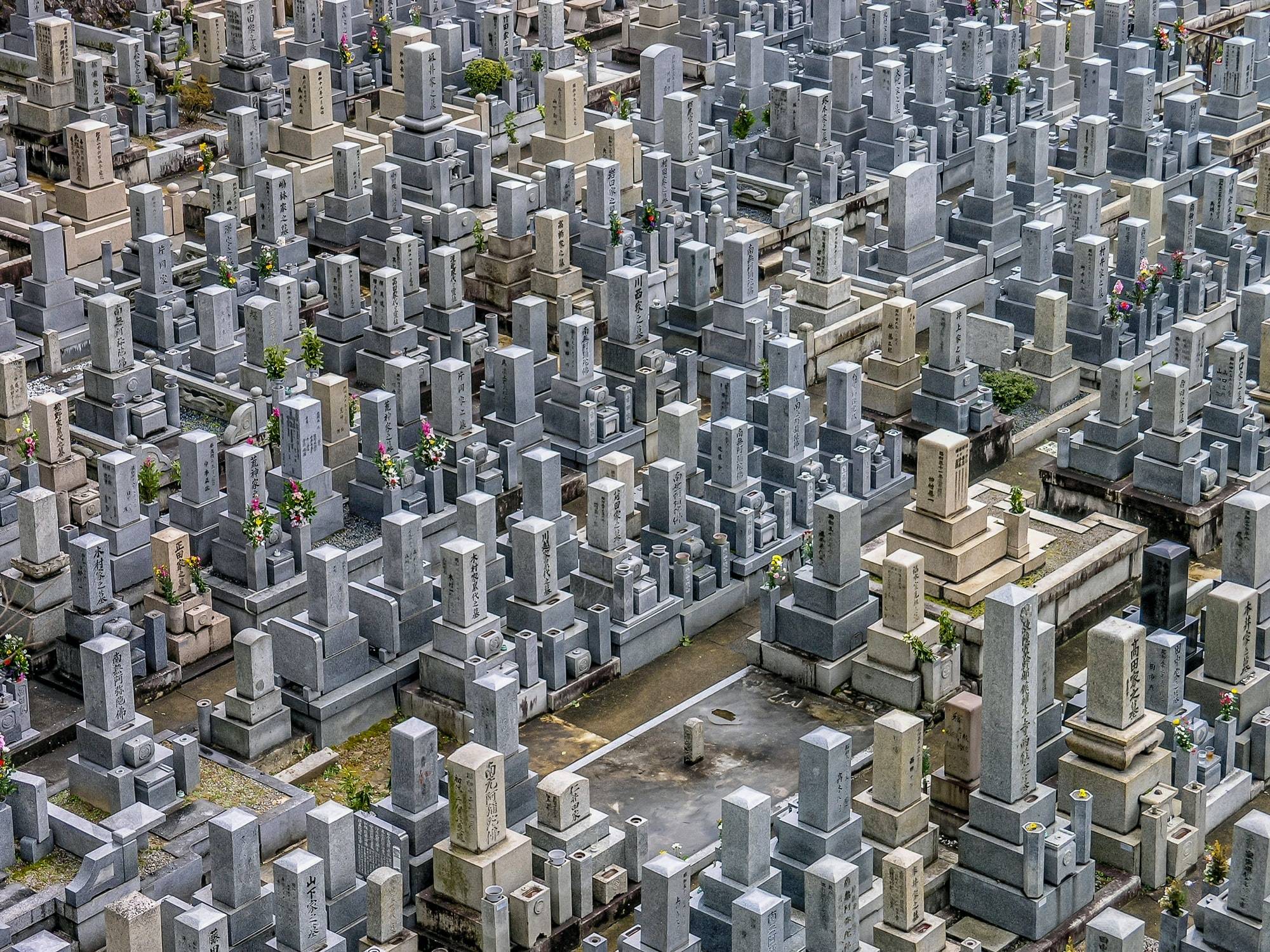 The prettiest graveyards across the world

Often connected to grief and sadness, these cemeteries are beautifully preserved windows to another time.

We often associate graveyards with mourning and sadness but the reality of the places can be quite different. Amongst the tombs and gravestones, you can often find peace and tranquillity that eludes us in other areas, especially in large cities. Cemeteries can hold the history of a place and are usually beautifully kept and well preserved due to the sanctity of them, making them interesting places to visit and beautiful settings to spend time reflecting in.

The largest cemetery in the city of Paris and the world’s most visited, Pere La Chaise opened in 1804 and is host to a variety of famous graves. It acted as inspiration for the cemetery in the 2004 film adaptation of Phantom of the Opera due to its overwhelming Gothic beauty. Thought to house over a million bodies, the rules to be buried here are very strict and yet there is still a waiting list. The graves vary from the simple monastic to enormous mausoleums (buildings housing a single or group of tombs), and some of the more famous names are in surprisingly humble plots.

One of the most famous and most visited graves is Jim Morrison’s. Despite many attempts to prevent it, the grave is often vandalised by mourners as they pay their respects. Julie from Earth trekkers described their visit. “Entering the cemetery is almost like entering another world. The traffic and the rush of city life falls away, replaced by the quietness and solemnity of the cemetery. Walking along the cobblestoned pathways in the shade of the trees can be calming and strangely beautiful. Take your time to read the headstones, take some photos, and consider the history of this place.” Julie also comments that this was their son’s favourite memory of Paris.

The Highgate Cemetery holds prime territory in North London and is steeped in the drama of the Victorian age. Beneath heavy English skies, this cemetery is atmospheric in its mourning and framed with lush greenery, appearing as it would in the setting of any good ghost story. This is compounded by the cemetery falling into disrepair and hundreds of supernatural stories of nocturnal hauntings focusing around the area. By 1975 there was a bid to restore the cemetery to its former glory, but there remains a sombre feel to the grounds.

The most famous grave is undoubtedly Karl Marx Though at the time of his death it is recorded that a bare handful of mourners attended, it now ranks as one of the most popular graves in London. Originally Marx was buried in a humble plot but after pressure from the Soviets at the end of the 1920’s this was eventually remedied in 1954 when a much grander monument was erected.

This was Japan’s first public cemetery and thus includes a relatively large section for foreign graves. A few mere minutes’ walk from both the busiest train station and pedestrian crossing in the world, Aoyama cemetery is an oasis of calm. It is beautifully kept and has a soothing atmosphere amid the low stone pillars and soft green squares. However, the beauty of this cemetery is in the timing.

If you go to Aoyama Cemetery in early April you will see the incredible cherry blossoms Japan is famous for. The cemetery is attached to a park where many people indulge in a traditional ‘Cherry blossom picnic’, and though this may be a more macabre venue, it is no less beautiful. The most visited grave here is that of Hatchiko, a dog that has become Japan’s symbol of loyalty and fidelity.

This is not strictly a graveyard or a cemetery, in fact as the only one of its kind, it is somewhat hard to define. Neptune Memorial Reef is best described as a Cremation Memorial Site, as cremated remains are mixed with cement to form features of the reef with memorial plaques added later. The idea of this unusual memorial is to create a thriving coral reef, a destination for divers, marine biologists and marine conservationists and transforming a 16 acre barren stretch of ocean floor into a viable habitat.

It also allows those with a close affinity to the sea and its creatures to become a structural part of the reef’s future. Many mourners take diving courses in order to visit their loved ones in their underwater glory and reaffirm the family connection with the ocean. The Neptune Memorial Reef has plans for significant expansion in the near future.

Named after the order of monks that originally arrived in the area, the cemetery is built around their convent and after the order was disbanded, the garden of the convent was converted into the first public cemetery in Buenos Aires. With 94 vaults being classified as National Historic Monuments by the state, the cemetery is well looked after and protected. In a strange amalgamation of styles, La Recoleta has a presence all of its own. Every style is represented from fairy tale mounds to pristine obelisks, some have been tailored to the life of the person they enclose, such as an Irish-born admiral whose mausoleum is partially built from the melted-down cannons of the battleships he once commanded.

Every step is a discovery in this beautiful cemetery as each corner uncovers a famous name or beautiful mausoleum. Winnie Van from OliviaOyster.com felt moved by the cemetery “The cemetery is an enclosed village of tombs. I say village because the tombs are more like small lavish homes. Only the most important families are buried here – it’s like a who’s who of Argentine history. Some of you might even recognise names like Eva Peron and writer Jose Hernandez (snaps to you, you history buff!). It all looks very grand and impressive.”

This cemetery is not old compared to any on this list and yet it contains a southern gothic glamour that is entirely its own. Located on the site of an old plantation, it has captured the imaginations of every sort of artist, as writers, film makers, photographers and poets constantly find inspiration in its haunting grounds. It clearly shows the alteration in the ideals of dying, where, as the Victorians romanticised the delicacy of life and the beauty in death, grave yards became destinations to reflect and quietly ponder the meaning of life.

The humidity can lead to a sense of oppressiveness, but also brings the verdant growth that adorns most of the memorials. Rhonda from travelyesplease felt immersed in the experience “We had such a wonderful morning exploring Bonaventure - a definite highlight from our 3 days in Savannah! Even though our tour was quite long and in-depth, I still want to go back and experience the cemetery again. Hopefully next time we’ll have a chance to visit when more of the flowers are in bloom.”

Amongst the strong catholic feel of the Italian capital, the protestant cemetery is a shady green haven in Testaccio. The grounds are surrounded with high walls, keeping out the noise of the traffic and an enormous Egyptian-style pyramid dominates one wall adding to the other-worldly feel of the graveyard.

The cemetery remains untouched since the 18th century and the less crowded areas have the feel of a relaxed park, with people reading and enjoying the Italian sun. Mariangela from blocal-travel.com can still sense the history beneath the serenity: “I meditated about all those foreign people buried there who came to Rome from abroad attracted by the arts, the poetry and Rome’s decadent beauty, all those young European who flew in the face of malaria and other fatal diseases in order to accomplish the ‘journey to Italy’.”

A relic of British colonialism, The South Park Street Cemetery is an ode to gothic grandeur in the heart of India. Opened in 1767 and fashionable with Europeans, it shortly fell in to disuse as the trends changed, and according to a plaque on the gate, it closed in 1790. While most of the crumbling mausoleums could be straight out of any English graveyard, the ever-encroaching moss, overhanging trees and intense humidity remind you otherwise. There is a strange blend of religions represented, though mostly Christian, a central dome is decorated with carvings that are distinctly Hindu.

Ron Mayhew, whose passion for photography brought him to the leafy solitude of South Park Street Cemetery, believes the deterioration here represents something deeper “The cemetery was a highlight of my Calcutta visit. While it is a look into the city’s early history and grandeur, it is in itself, crumbling and decaying like much of Calcutta.” The truly unusual aspect of this cemetery is the loneliness and silence felt here, amidst the third most populous metropolitan area in India.

The monastery is flanked by the Lazarus and Tikhvin Cemeteries and there lies many renowned Russian luminaries. The monastery itself was built in 1710 and was named after the patron saint of St Petersburg. G Adventures describes the Tikhvin Cemetery as “A peaceful escape from the bustle of the city, the cemetery also provides a fascinating glimpse into the world of the Russian nobility. Mausoleums and grave markers are packed close together, often adorned with intricately-sculpted angels, crosses or family coats of arms.” It’s also worth noting that unlike many Western cemeteries, the angels are mostly in male form.

Tchaikovsky and Dostoevsky are probably the most famous names in this cemetery and are often visited by foreign tourists looking to pay their respects.

Discover our range of gravestones, or read more on our news page.