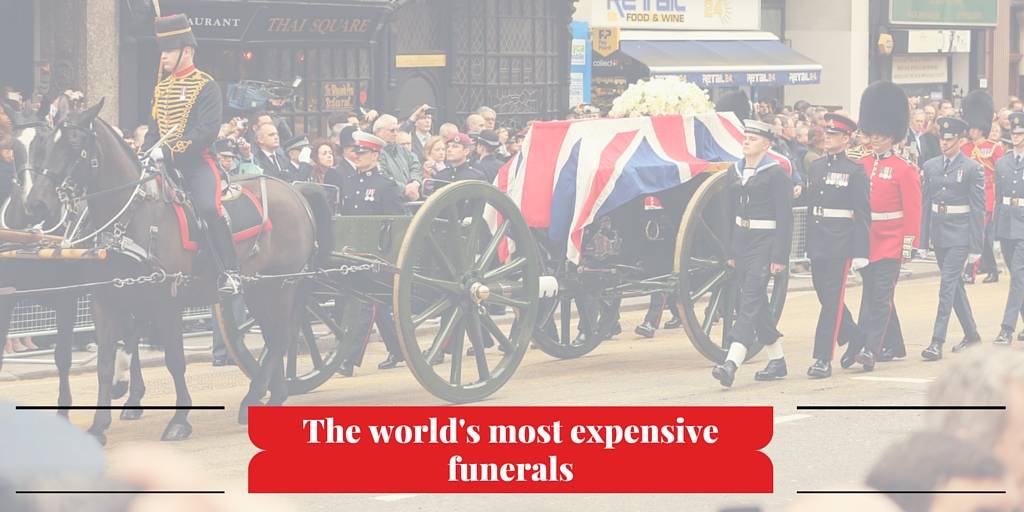 The world’s most expensive funerals

Take a look at some of the most costly celebrity funerals that have taken place across the world.

Funerals are a celebration of the lives of those that have passed,and for many in the limelight these are often huge spectacles reflecting thepersonality of the deceased. Money is often no object in these circumstances,meaning that celebrities and those in power can have extravagant services andmemorials. Here, we take a look at some of the most high profile and costlyfunerals to have taken place.

Due to her kind nature and extensive work for charity, the People’sPrincess was incredibly popular all over the world, making the news of herdeath deeply saddening. She was just 36 years old when she was killed in a carcrash, which caused extensive public mourning and widespread media attention.

Her funeral was televised on 6th September 1997, withthe British television audience peaking at 32.1 million, one of the UK’shighest viewing figures ever. Two billion people worldwide also traced theevent, which made it one of the most watched events in history.

Although Princess Diana was no longer the wife of the Prince ofWales, she was still given a royal funeral, which cost approximately £5 million. The official ceremony washeld at Westminster Abbey, and included readings from her family, as well as aperformance by Elton John.

Despite passing away following a stroke in 2013, planning forMargaret Thatcher’s funeral had already begun in 2009, while she was stillalive. The reception to her death was mixed, due to a divided opinion about herlegacy, with many complaining that she was receiving a partly state funeral.

The former Prime Minister’s funeral was paid for by her estate andtax payers, and is thought to have cost the public £3.6 million, which included large sums for security services. Herfamily are thought to have covered the cost of the transport, flowers andcremation.

A church service took place at St Paul’s Cathedral in April 2013,which was preceded by a formal procession through the centre of London.

After suffering with Alzheimer’s disease for almost a decade,Ronald Raegan passed away due to pneumonia in June 2004, at the age of 93. Hehad previously served as the 40th President of the United States,while also boasting a career as an actor and commentator.

The state funeral took place over 7 days, with the main ceremony held at theWashington National Cathedral, on the same day that president George W. Bushdeclared a national day of mourning. Tens of thousands of people headed toCapitol Hill in order to visit his coffin.

Speculations suggest that the funeral of the US president may havecost up to $1 billion, when takinginto account the total cost of expenses. During the official Day of Mourning,stock markets were closed, federal workers were given the day off, and allmedia focused on nothing but the event.

The King of Pop suffered a cardiac arrest in June 2009, less thanthree weeks before he was due to begin his final series of concerts in London,which would have earned him a staggering £50 million.

Twelve days after his death, a public memorial service was held forMichael Jackson at the Staples Centre in Los Angeles. This was organised by hisconcert promoter, AEG Live, who gave away 17,500 free tickets for the event tofans. More than 1.2 million applicants applied in 24 hours, with the websitereaching over half a billion hits during this time. Due to the overwhelmingnumber of people expected to attend, many of the streets and highwayssurrounding the building were closed off, with the security effort costing thecity $1.4 million.

The ceremony was attended by many famous faces, including StevieWonder, Lionel Richie and Mariah Carey, and was broadcast live around theworld. His $25,000 casket made asurprise appearance at the funeral and was made from solid bronze, plated with14-karat gold, and lined with blue velvet.

While seemingly inexpensive when compared to the other funerals onthis list, the funeral of Elvis is worth a mention due to his copper coffin andthe use of 17 Cadillac limousines. Approximately 80,000 people lined theprocessional route, with thousands gathering outside the cemetery to view hisopen casket.

His actual funeral was closed to the public, with estimatessuggesting that his funeral would have cost $400,000 had it taken place today. More than 25,000 fans headed tohis home in order to pay their respects, with hundreds of thousands of peoplestill travelling to visit the grave headstone at his former home each year.

While some believe that the star is still alive, Elvis was in factburied at Forest Hill Cemetery in Memphis, before being reburied in Gracelandafter a failed attempt by criminals to steal his body.