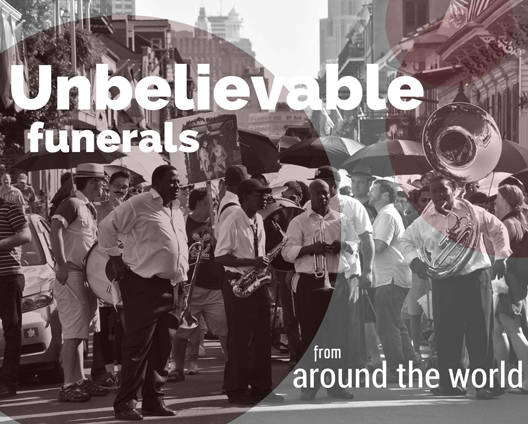 Unbelievable funerals from around the world

A person’s funeral is a very special and sacred thing, particularly to those who knew the deceased. As such, it stands to reason that the practice of funeral plans are as diverse across the world as the people in it.

When it comes to funeral plans in this contemporary age, it is not just other cultures and traditions that pay respect in a seemingly more unusual and perhaps unbelievable fashion, but certain customs are becoming increasingly popular in the UK. Here is an insight into the varying takes on the funeral process from different religions and customs from around the world.

Religion has always had a fairly strong influence on the way in which we remember our deceased, but few know or understand opposing religions’ customs in this area. The differences between the funeral plans of various religions is both interesting and often inspiring, offering non-religious individuals inspiration for their own ceremonies.

Many in the UK are accustomed to the traditional Christian funeral. This typically takes place in a church, with a sermon conducted by the vicar or priest and the deceased buried in consecrated grounds. While it was traditionally thought that only burial was accepted in the Christian faith, cremation is now increasingly common among Protestants and is more recently permitted among the Catholic faith, although Eastern Orthodox is still widely opposed to this form of funeral.

The most distinct aspect of a Jewish funeral is that the deceased must be buried as soon after their death as possible. There is then a seven-day mourning period, known as shiva. One of the main reasons the funeral is held so soon after death is so that the utmost respect is shown to the deceased as it is seen as more respectful to bury the body within a shorter space of time.

The Buddhist funeral comes from Indian custom, whereby the body is burned in a funeral fire so as to help the spirit through the transition period into the next life. In accordance with the Buddhist religion, death and funeral plans are a significant religious event, whereby karma and rebirth are considered deeply. If a person has been good throughout their life and secured good karma, it is believed that they will be repaid in the next life.

While religion plays a major part in funerals across the world there are an increasing number of non-religious funerals in which the deceased is still remembered through a ceremony. A Humanist funeral is conducted by a Humanist officiant and, opposed to a Buddhist funeral, does not recognise an afterlife but instead celebrates the life of the deceased. Humanist officiants are appointed by the British Humanist Association in England and look to science rather than religion.

There are many other funeral traditions and customs around the world that are not necessarily religiously linked. Here are just a handful of the most intriguing and thought-provoking.

The funeral clown is a custom that originated in ancient Rome, where it was believed that by hiring a funeral clown to mock and make jokes during the funeral proceedings it would pacify the deceased whilst keeping a light atmosphere for those in attendance.

Today, this tradition has been revived with some families calling in professional entertainers to help respectfully lighten the mood. One man in Ireland has even made a business out of this form of funeral entertainment.