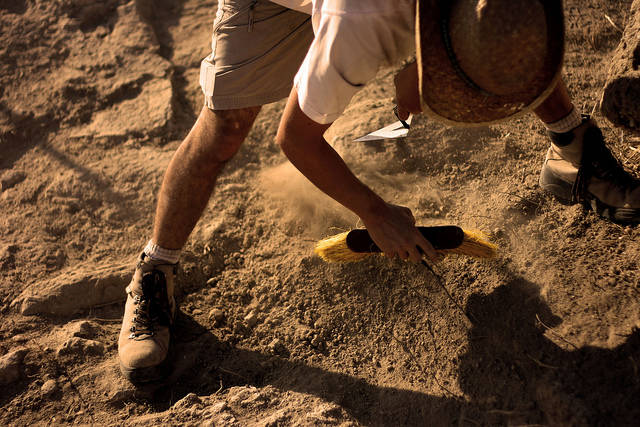 Gravestones written in Aramaic and Greek have been uncovered in northern Israel.

Three ancient gravestones have been uncovered in northern Israel with Aramaic and Greek inscriptions.

The excavation was conducted and researched by archaeologists from the Kinneret Institute for Galilean Archaeology in Kinneret College and the Israel Antiquities Authority (IAA). The gravestones were buried and found in a cemetery in Zippori, which was a major Jewish city in ancient times.

Two of the three inscriptions identify the people commemorated as rabbis, and end with the Hebrew greeting word ‘Shalom’, meaning ‘hello’ or ‘peace’. The word ‘loelam’, meaning ‘forever’ was also inscribed on one of the gravestones and is the first to be found in Zippori. In the context that it was written, it explained that the individual’s burial place will remain his forever without anyone robbing it from them.

Speaking to ynetnews.com, Dr. Motti Aviam explained: “This is the second case of a person from Tiberias buried in the Zippori cemetery. Perhaps Jews from all around the Galilee chose to be buried in Zippori due to Judah the Prince’s important activities in the city.

“The significance of the gravestones lies in the fact they reflect the daily life of Jews in Zippori and their culture 1,700 year ago.”

Many artefacts have been uncovered over the past century indicating it was a bustling Jewish community in ancient times, including Jewish baths and 17 other epitaphs.

The gravestones are due to be taken away for further examination as the archaeologists believe that the new findings will lead to greater discoveries and will soon be on display for the general public.

Like you would see in graveyards today, the importance of a memorable and lasting inscription on a gravestone was just as valuable to friends and family back in ancient times as they are today.